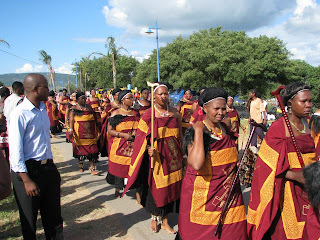 Celebrating one of Southern Africa’s botanical treasures, the Marula Festival is one of Swaziland’s most spectacular cultural events. A tribute to the riches of Mother Nature, the Marula festival is an annual royal celebration. Every year festivities are initiated by King Mswati III and Her Majesty the ‘Indlovukazi’ the Queen Mother, who travel all over the kingdom leading the nation’s celebrations.

The Marula festival, known locally as ‘Emaganwini’, begins in February when the fruit is harvested by women and children and continues until March. The unripe green fruit falls from the tree and is stored until it ripens to a creamy yellow colour, it is then soaked with water and sugar to ferment and make Marula beer, the traditional toast of the festival.

The Marula tree (sclerocarya birrea) is indigenous to Southern Africa, and has been a central part of the Southern African way of life for thousands of years. In Swaziland, about 2 million Marula trees grow in forests and bush, grazing lands, fields and homesteads and are protected from felling by traditional laws which are enforced by local chiefs.

Not just used for beer, Swazi people use every part of the Marula tree for a wide variety of domestic needs. Marula contains four times more vitamin C than oranges, and is rich in minerals and anti-oxidants. The bark of the tree has a range of medicinal uses, however it is the oil from the seed kernels that has real commercial potential due to its moisturising and conditioning properties, as a result there have been many skin care products developed using the oil as a base.